Lecturer in the History of Science Department at Harvard University 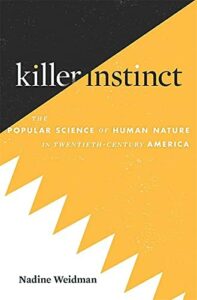 Cheiron’s Book Prize Committee is pleased to announce that the winner of the 2022 Cheiron Book Prize is Dr. Nadine Weidman, Lecturer on the History of Science at Harvard University, for her book Killer Instinct: The Popular Science of Human Nature in Twentieth-Century America, published by Harvard University Press in 2021.

A long-time Cheronian, Nadine received her Ph.D. in Science and Technology Studies from Cornell University. Her previous two books, Constructing Scientific Psychology: Karl Lashley’s Mind-Brain Debates published by Cambridge University Press and Race, Racism, and Science: Social Impact and Interaction, co-authored with John P. Jackson, Jr.) have been widely acclaimed, as have her many book chapters and journal publications. In addition to her research and teaching, Nadine has served as editor of the quarterly journal History of Psychology, having stepped down this past year.

Nadine’s major concerns focus on the history of research on instincts and emotions, the dissemination of these ideas through the popularization of science, and how this contributes to the changing conceptions of race and gender in the human sciences. These issues, of course, are as relevant today as they were when they first emerged, and her examination and analysis of this ongoing episode can be seen as a cautionary tale as we move forward.

We are pleased to see  – especially since it confirms the committee’s opinion – that such heavyweights as Glenn C. Altschuler, B. Natterson-Horowitz, Rebecca Lemov, and our own Andrew Winston have “gone-on-the-record” and reviewed Nadine’s book in glowing terms.

The committee also recognizes two finalists for the prize: Paul Christopher Johnson, Professor in the Departments of History and Afroamerican and African Studies, University of Michigan, for his Automatic Religion: Nearhuman Agents of Brazil and France (University of Chicago Press, 2021), and Courtney Thompson,  Assistant Professor of History, Mississippi State University, for her An Organ of Murder: Crime, Violence, and Phrenology in Nineteenth-Century America (Rutgers University Press, 2021).