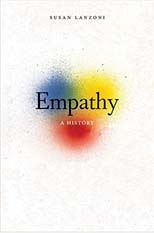 Cheiron (The International Society for the History of Behavioral and Social Sciences) awards the 2020 Cheiron Book Prize to Susan Lanzoni, (Harvard University’s School of Continuing Education) for Empathy: A History (Yale University Press, 2018).

In this far-reaching and wide-ranging exploration of the concept of empathy, Susan Lanzoni takes her readers through a complex history of branching uses and meanings, arriving at the pervasive yet vague notion of empathy current today.

Empathy first appeared in the English language in the early twentieth century as a translation of the German word Einfühlung (“in-feeling”)—originally a concept in German aesthetics that described projecting the self into artistic objects. This early projective meaning was eventually transformed into its opposite, becoming a psychological concept defined as the capacity to accurately predict another’s opinion or preference. Lanzoni follows empathy’s varying definitions, conceptualizations and practices through history, chronicling its use in the fields of psychology, social science, politics, psychiatry, psychotherapy, advertising and media, ending in the neuroscience of today. The meaning and scope of empathy was vigorously debated in each of these fields—and as interest in the topic grew, its meanings proliferated.

Lanzoni navigates this historical complexity by painting vivid scenes and settings in which empathy was taken up and engaged, starting each of the nine chapters with a period vignette that unveils empathy as understood and performed by social scientists and psychologists. Through all these transformations, a continuity is evident in the envisaging of empathy as a power of the self to shape its relation to the world: to enter into alien forms, to transform art objects, to inhabit other realities or to engage the experiences of others. It puts our self-containment into question and promises connection. Lanzoni offers us an enlightening exploration of a central, and timely, concept.