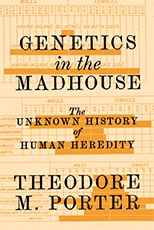 Cheiron (The International Society for the History of Behavioral and Social Sciences) awards the 2019 Cheiron Book Prize toTheodore M. Porter, (Distinguished Professor of History, University of California, Los Angeles) for Genetics in the Madhouse: The Unknown History of Human Heredity (Princeton University Press, 2018).

In this originally framed and broadly conceived study, Theodore Porter offers a masterful account of efforts to use statistics to understand mental illnesses. Porter focuses on research produced within asylums, hospitals, schools for the “feeble-minded,” and prisons. By systematically counting cases, causes, and outcomes, such institutions were in effect developing a new science of heredity. Especially rich are Porter’s close readings of tables, graphs, case books, and pedigree charts—in short, the kinds of data that fill publications and archives of these institutions.

Through a series of case studies, Porter explores nearly two centuries of such research in England, France, Germany, Norway, the United States, and other countries. His history begins with late 18th century English authorities asking institutional physicians to predict whether their “mad” king, George III, could be cured; it ends with Nazi practitioners generating their own versions of institutional statistics. In between, Porter introduces significant yet largely unknown characters and fresh insights as he reconsiders changes in the meanings attached to insanity and heredity, the relationship between asylum failures and the emerging eugenics movement, the transnational dimensions of conflicts between Mendelians and biometricians, and the crucial yet underrated centrality of asylum medicine to the history of genetics. Equally important is what Porter calls the “paradoxical relationship” between “ordered, standardized statistics” and “the disorderly scenes of madness and of suffering that they are supposed to sum up” (p. 7). Even amidst this disorder, what emerges from Porter’s account is a transnational conversation, with practitioners translating and using each other’s findings to generate an early version of “big data.”

Deeply researched, elegantly constructed, and compellingly argued, Porter’s work illuminates the promise and perils of statistical reasoning in new ways. It also broadens and deepens our knowledge of how genetic science was created, investigated, and communicated—among institutions, over time, and across continents.

Ruth Leys, The Ascent of Affect: Genealogy and Critique (University of Chicago, 2017).