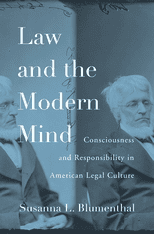 Cheiron (The International Society for the History of Behavioral and Social Sciences) awards the 2017 Cheiron Book Prize to Susanna L. Blumenthal (Julius E. Davis Professor of Law and Associate Professor of History at the University of Minnesota) for Law and the Modern Mind: Consciousness and Responsibility in American Culture (Harvard University Press, 2016). Dr. Blumenthal’s book contributes much to our understanding of the quandaries that lawyers and jurists faced and explored as they considered the appropriate legal relations between human activity and culpability, particularly over the course of the nineteenth century.

During the early years of the American republic, as the precedents following from inherited position fell away, jurists found themselves having to consider matters of standing, evidence, and responsibility in new ways. In doing so, they found that human subjectivity took on new consequences. Well into this process, Associate Justice Oliver Wendell Holmes Jr. wrote in 1894, “In a proper sense the state of a man’s consciousness always is material to his liability.” Relying on extensive knowledge of the primary sources (including routine civil and criminal cases), Blumenthal provides historians, psychologists, anthropologists, and other readers with an invigorated understanding of the emergence of refined notions of the individual (generally white men, at that time): they became singular legal persons, and there were circumstances by which such legal persons could be held culpable for their actions or culpability might be limited due to mental impairments of various sorts.

Blumenthal’s prose is lucid and subtle. Her exposition is both magisterial and thought- provoking. For example, the historical examination of the jurisprudence of insanity illuminates contemporary attitudes toward ‘others’—children, women, and slaves.